Art from the ashes

The charred remains of Flavio Bisciotti’s burned-out art studio give new meaning to the term “man cave.” A mural of a bearded man is crackled and black. Fire-singed sketches of female nudes are scattered on the floor. Shreds of burnt paintings hang from the walls.

All are remnants from a freak fire that ripped through the Venice shack in the wee hours of Jan. 5, consuming 25 years of artworks, photographs, personal documents, records, letters, electronics, clothes and souvenirs collected or made by Bisciotti. 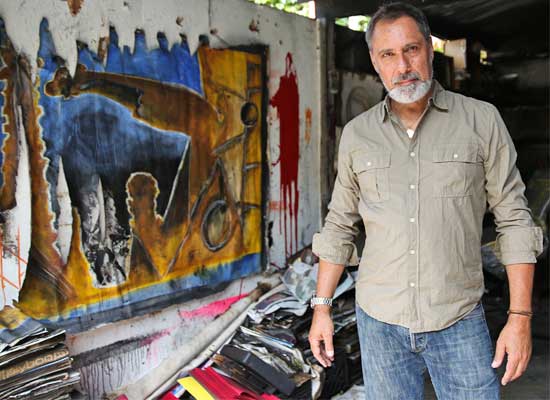 “My studio was my man cave,” says Bisciotti, an artist, architect and gallery owner originally from Argentina. “It was a place that I spent time working, painting, relaxing, thinking.”

But this place’s purpose as a site of active creation has not been lost to its destruction. Over the past few months, Bisciotti has invited his artist friends to take whatever they want from the incinerated studio — a burned door, scorched speakers, crisped up credit cards — and transform these items into art pieces that will be presented in two group shows, one in the studio in October and another at Bisciotti’s FAB Gallery in Santa Monica in January.

He calls the project “Palimpsest,” which means “something reused or altered but still bearing visible traces of its earlier form.”

Though still a work in progress, it has already yielded some interesting results, says co-curator Delia Cabral.

“I have seen some wonderful photographs by artist Brian Murphy. … I have seen new paintings revealed from old remains by artist Gary Palmer. I cannot wait to see what other treasures will emerge from the ashes,” she says.

When I visit what remains of Bisciotti’s studio behind his Venice bungalow, Murphy is tracing the outline of Bisciotti’s old tools onto some newspapers that he’s painted white.

“Tools to fix things,” muses Murphy as he looks over his work for “Palimpsest.”

Artist Tori White has joined him, sketching rings of dappled light falling from the trellis above onto the newsprint.

“It’s a good ceremony to say goodbye, to start new,” she says of participating in the project.

For Bisciotti, turning his tragedy into an artistic endeavor for the Westside’s art community has been an opportunity to think positively and creatively about the fire’s impact on his life and work.

“Basically, the first two weeks [after the fire] I was kind of like shocked, you know,” he says. “I just went in there and saw everything broken and burned and wet. If things were not burned they were broken.”

Bisciotti says he lost everything, “but at the end nothing, because it’s all stuff.”

Then he got an idea.

“One day I was at the gym, running on the treadmill, and I thought, ‘What if I create something with this?’” recounts Bisciotti. “That’s what was my first thought. And then because I know most of my friends are artists from here, from Venice, I start talking with different people and the whole reaction is very positive. Like, ‘Yeah, that’s a great idea.’”

The project continues to evolve as Bisciotti keeps inviting artists over to make new artworks from his studio’s debris and updates the progress of “Palimpsest” on his Facebook page with photos and videos.

Bisciotti, ever the architect, ultimately hopes to rebuild the studio.

“I am thinking of building a concrete box with a unique, large room with high ceilings and good ventilation, as well as light,” he says.

But he had to do something with the cinders first.

“Instead of throwing those things away, I’m going to rebuild them in a way,” he says.