As a result of a devastating fire at his home studio, Flavio co- created “PALIMSEST.” A collaborative group show created by friends and local Venice artists. Each artist created a piece of art, using salvaged objects from the remains of the fire. The first exhibition was held in the burned out studio. “It was a great success both personally and for the friends and artists who participated in the project. I feel very pleased with the work created.” A second show was held at FAB-gallery, this time including a photo timeline and a documentary film about the entire process. “I think it was a well received and people found it emotionally compelling and thought provoking.” Bisciotti said the project allowed him to deal with his loss and move through it more quickly. He drew inspiration from the idea of creating something new from the remains of the fire.

“The documentary was an incredible tool to illustrate the events of the fire leading to the resulting exhibit. It was like creating a piece of art, in and of itself. Felipe Martinez-Carbonell and I worked together to make the film. I was moved at the first public screening, seeing how the audience became emotionally connected to my experience.”

“Last year’s events definitely changed my way of looking at my career and made me think about a future focused more on making art.” Bisciotti said the experience was freeing and allowed him to reinvent himself. “It made me realize something about the passage of time and acknowledging the strong desire to make art. Bisciotti strives to make art every day now. “Creating is always on my mind, how to make an object or how to continue with my next painting or project.” His next series Invisible Cities, features a 22ft. long mural depicting buildings that hold personal meaning. 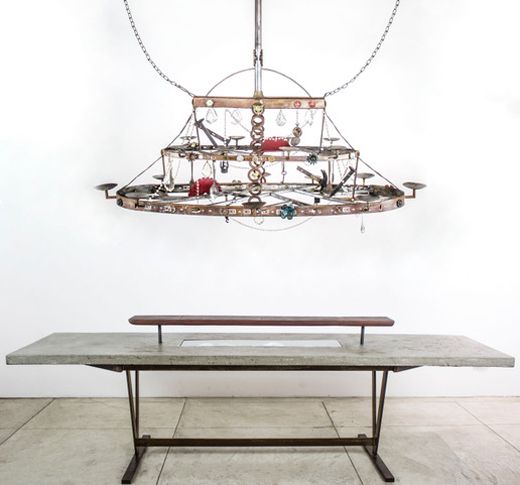 Flavio’s solo show, “Objects from the Ashes,” culminates the year-long project resulting in several works of art of his own. Currently on view at FAB-gallery through September 3rd, an art talk will be held with the artist led by Megan Frances Abrahams Artist, Art Critic, Editor of Fabrik Magazine.

To find out more, check out these websites. https://www.flaviobisciotti.com/site/​ http://palimpsest-venice.com/ or contact Flavio at 310- 630-9216.